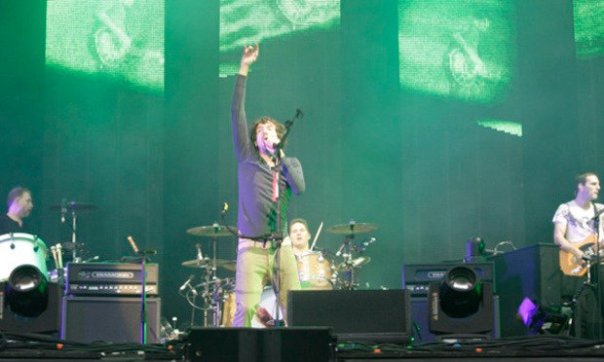 Even on paper this concert sounded quite magnificent, and that’s just exactly what it was. Still the previous day’s revelations of concert chaos, mud fields and travelling traffic jams to the Phoenix Park had no inkling of deterring the excited Sunday revellers.

A showery day which began with excellent support from bands, Here we go Magic, We are Augustines, Bressie, The Temper Trap and concluded with the exceptional Florence and the Machine perfectly set the stage for one of the most impressive Snow Patrol performances ever.

The band blasted onto stage with ‘Hands Open’ at around 9 O’ Clock to a foray of extraordinary lights and visual images of soaring eagles and snowflakes which scattered throughout the show, creating a seriously well presented stadium production.

What followed was an array of impressive hits including ‘Take Back the City’, ‘Crack the Shutters ‘and ‘This isn’t everything you are’ which the crowd in unison sang back every word.

As Gary Lightbody exclaimed, “18 years of dedication has lead us to this; possibly the most nostalgic gig of our lives”, the always melancholy ‘Run’ boomed from the stage again not leaving one reveller devoid of every lyric rolling off their tongues.

‘Chasing Cars’ and ‘Chocolate’ sent the crowd into a distinct aura of ecstasy as I’m sure many were waiting for these two fan favourites. As the revellers chanted those distinct words, “as a child of 25” an amazing roar of nostalgic applause and hopping happily about ensues.

As the lads crack on into the amazing ‘Open your Eyes’ and huge hit, ‘You’re all that I have’ you can feel a definite sense of comradeship between groups of friends as happy hugs and general reminiscence occur between Snow Patrol’s amazing following.

The encore included an emotional rendition of the very personal ‘Lifening’ as Gary sang an ode to his father whom he had brought on stage as we all applauded. With this you could definitely feel the genuine emotions exuding from not just father and son, albeit the whole band.

The set was topped off with the upbeat pop classic, ‘Just Say Yes’ as the whole audience from the front to the very back danced around ecstatically in the mud which concluded the perfect ending to the upmost perfect day.

Snowpatrol are well renowned for putting on a great show which I myself can vouch for having been in attendance for most of their Irish gigs over the years. Whilst this may be the case I strongly believe they may all perhaps have been leading up to this performance, this one was indeed something special.

The show as a whole was undoubtedly impressive on all accounts, leaving my only wish that the Nordie lads could play a Springsteenesque 3 hour show.

Speaking to one fan after the concert they exclaimed, “No joke, it was actually the greatest night of my life.”

I reckon this gig will be talked about for some long period and will most certainly be one of those etched in Irish music lovers heads for some time to come.
© Audrey Mulholland 2013